Good morning all!
I've got a card to share with you today!

SNEAK PEEK ALERTLa Pashe are back on C & C on Monday with a 4 day deal featuring
"The Big One" CD-ROM Volumes 1 & 2.
"The Big One was a limited edition compilation CD of the best of La Pashe 2008-2011,
released five years ago, but people still ask about it now, so, La Pashe thought they would
re-release it, along with a second volume featuring everything they have done in 2012-2014.
Thanks Sharon, you put it beautifully!

Now, here's sneak peek of one of my samples! 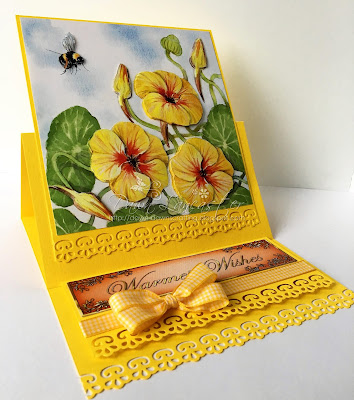 Nice & Easel Nasturtium & Bee
I simply used a 6"x 6" card base edged with a Martha Stewart border punch
Then added the decoupage. The sentiment panel is mounted on some cs which was punched,
wrapped with gingham ribbon, from my stash, tied in a double bow,
then raised on foam tape to act as the stop for the easel section.
Nice & Easel indeed!
I'd like to enter this card in the following challenges:
Crafting for all Seasons - Use Die-Cuts/Punches
Double D Challenges   - Yellow A Happy Place To Be (Photo Inspiration)* 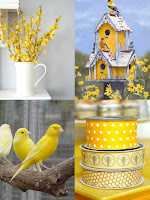 Fresh Brewed Designs - Ribbon or Twine
Clear It Out - Springtime Stash: Add a Flower
Through The Craft Room Door  - Always Anything Goes