Sunshine on Leith! The Musical 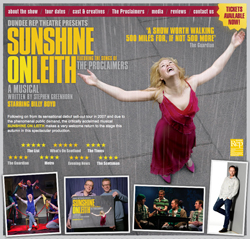 I have seen this show by the Dundee Rep Theatre group several times before but each time it's different!
A hard hitting true grit story of real life, could be set anywhere but it's set in Leith & makes reference to many of the local landmarks!
If you're not a Leither you might not get them, but it won't detract in any way from this well written  & extremely well acted gem of a show!
There is both laughter & tears as you go through real life situations with each and every one of the true to life characters!
If it comes to a theatre near you go see it!!
Posted by Dawn at 10:11