Hi all, it's Sunday & I'm on my hols for a week!!!
Not going away anywhere fancy, so I say, but we are having a trip to the Metrocentre, Newcastle Upon Tyne & a night on Lindisfarne, Holy Island.
In fact, all going well we're there by now!
Earlier this week I let you see a sneak peek of my GDT card for the Quirky Crafts Challenge Blog!
Now here's the whole thing! 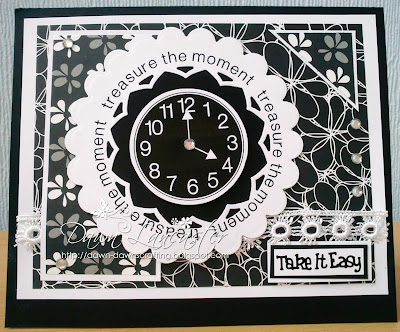 The Challenge is a sketch, mixed media, so it can be a card, canvas, layout or anything else you can apply it to!
We were given the choice of two sketches to work from 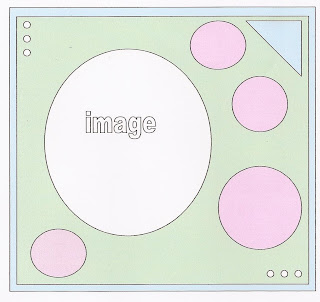 I chose the first one. We also had the choice of two sets from The Cutting Cafe' who are sponsoring the challenge,"It's About That Time" & "One Spring Day"
I chose "It's About That Time" as you may have already noticed as
over at Daring Cardmakers the challenge this week is to be inspired by the song Chasing Cars by Snow Patrol ( Let's waste time chasing cars around our heads..........) 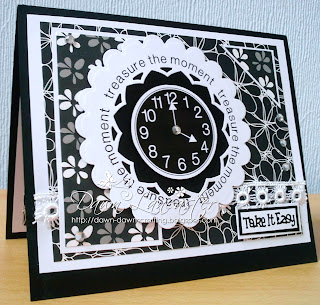 I chose the clock image & the large circle sentiment from the set.
I don't have a cutting machine, so I relied on just my trusty scissors & dies.
As the clock face was black, I was inspired to use black & white for my card!
The papers I have used are Dovecraft, they're called Charcoal Prints by Sandra Ranarison & they have been in my stash for ever!
(One of my resolutions at New Year was to try to use up some of my old stash this year & I think I'm doing okay so far!)
I cut out the clock face using my trusty decoupage scissors. The circle sentiment was cut using a scalloped circle nestie & then my Nellie's frame die.
I used black card to back the cut out circle & mounted the clock face in the centre with foam tape. 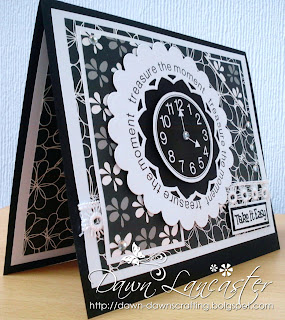 I followed the sketch & added some lace. I then mounted the sentiment on foam tape to give added dimension.
The other sentiment was from a sheet of peel off's that just appeared from nowhere when I was working! Must've been in between some papers or something! I thought the phrase went perfectly with my card so I stuck it to some white card, matted & layered onto more black & white card & mounted on foam squares.
To finish I added some large self adhesive gems. 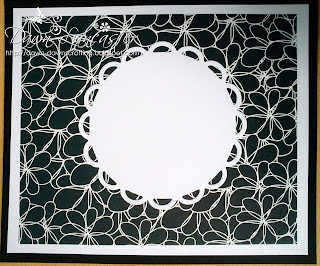 I decided to decorate the inside of the card a little, It's just a little bit more interesting than a plain insert!
Thanks for looking, I do hope you like it.
Have you noticed, there's not a Promarker in sight! lol
Pop on over to Quirky Crafts & join in with the challenge if you have time! Don't forget to check out the DT blogs too & leave them some love!
Challenges I'd like to enter my card in are as follows
Scrapbook Sisters Black & White
Truly Scrumptious Anything Goes
Bunny Zoe's Crafts Lace
House of Gilli Black & One Other colour
Craft Your Days Away White + I Other Colour
Designed 2 Delight White +1 colour
Marks Finest Papers Tone on Tone With The Focal Image Popped Up
Crafty Catz Anything Goes
Daring Card Makers Inspired by The Song Chasing Cars by Snow Patrol
Wags n Whiskers Circles
Crafty Purple Frog Challenge Monochromatic
Shelley's Images Anything Goes