Here's One For The Boys

Hi all, I'm back with my latest offering, it's one for the boys & is a footballer card! 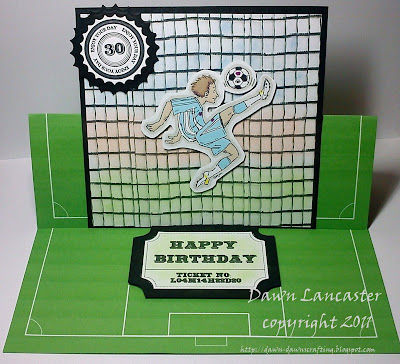 I was asked to make this for someone at work who's son will be 30 next week!
The only things he likes are football & computers!
I trawled the world wide web looking for a suitable image! I didn't want anything cute as I don't think this guy would really appreciate that. I eventually found exactly what I was looking for at Mo's Digital Pencil Too!
He's called Soccer Dude & until I put the pics up, I thought I'd done a good job of colouring him. As soon as you see them on the screen you see every little fault! I used promarkers for the image and chalks for the back of the net!!! I cut the image out roughly & mounted him foam pads! 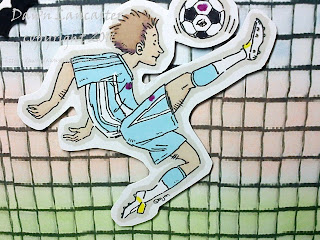 The football pitch base & goal netting were part of a free design by Jan McFarlane over at  Card Making Downloads!
The footballer is wearing the  Heart's of Midlothian Away Kit (or it's supposed to look a bit like it!)
I had to use the away kit as until today I didn't own a Maroon pen!!! Typically, it arrived the day after I needed it!!!

The sentiments were from Sentiments 4 You. 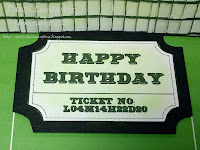 I love these tickets & decided to large this one & use it for the stop. First I went over it with green chalk Then mounted it on to black card & cut out the corners. I attached it to the base card using foam tape. 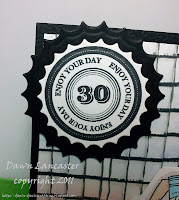 The 30 sentiment was made up of two seperate images. I added the age to the centre of the Enjoy Your Day! I then cut this out using a nestie & mounted on to the same shape of black card!