It's All About Anniversaries!

Tis clearly anniversary time in my little world!
I have another CAS Anniversary card to share with you today!
This one was made for my Sister & Bother in Law
who celebrate their anniversary today!
Happy Anniversary Patricia & Mark! 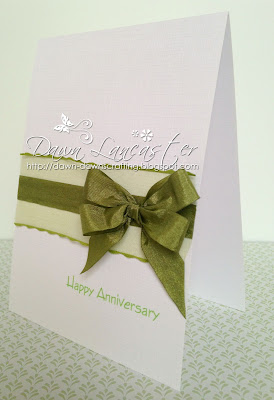 I simply printed the sentiment on to the A6 linen cardstock base.
(The font I've used is a free font called Enviro,)
Then added a strip of sheer ribbon, topped with a narrower
faux silk ribbon & topped with a double bow.
A simple paper insert was added to finish it off.
Thanks for stopping by!
I hope you like my little card!
I'd like to enter it in the following challenges:
Penny's Paper Crafty - Anything Goes
Crafting From The Heart -Anything Goes
Craft Your Passion - Anything Goes
Card & Scrap - Anything Goes/Love
Card Mania - Anniversary 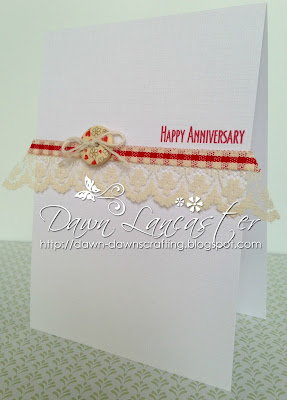 The sentiment was printed directly on to the card.
The Font I've used is Serengetti ITC
I added a strip of lace & a strip of ribbon, topped with
a button, threaded with some button twine which was tied in a bow!
Thanks for stopping by today, I do hope you like my little CAS card!

Get Your Sunnies On You'll Need 'em

We're finally seeing a bit of summer up here in Bonnie Scotland!
Hurrah!!!
Now, it's Monday again so it's back to work for me but first....
It's also time for a new challenge over at
Eureka Stamps,
where your theme for this week is
# 153 Hot Hot Hot
Here's my card! 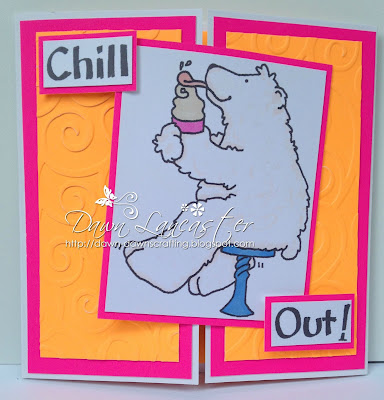 I opted for Hot Neon Colours! lol
The colours are even more vibrant in real life! lol
The image I have used is Digi 20002 Sm Ice Cream Bear!
What else would a polar bear do when it's hot?
The sentiment is from Eureka Stamps too Digi  20105 Chill Out
My card base is a 5"x5" gatefold.
The Neon papers are by papermania.
I coloured the image with promarkers & used the cuttlebug swirls
embossing folder on the orange paper. 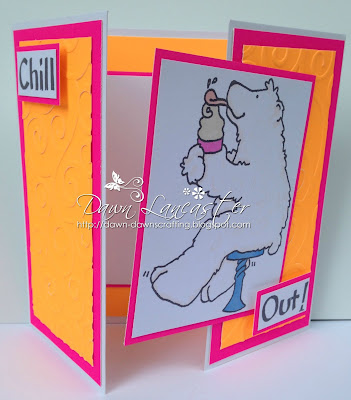 The image panel just tucks behind the top part of the sentiment
to keep the card closed!
As you can see, I added the neon papers to the inside of the card too!
I hope you like it & I can't wait to see what you create for the
Hot Hot Hot Challenge!

I'd like to enter this card in a couple of challenges:
Come & Get It - Feature A Creature
One Stitch At  A Time - Anything Goes With Sweet Treats
Pile It On - Summer Or Winter
A Gem Of A Challenge - Animals Or Birds
Allsorts - Inspired By Summer
Sweet Stampin' - Anything But A Birthday

Good morning all!
The card I have to share with you today is a commision.
I was given free reign to make a Ruby Wedding card
for a friend to give to her husband.
Happy 40th Wedding Anniversary Liz & John!
Here's what I came up with! 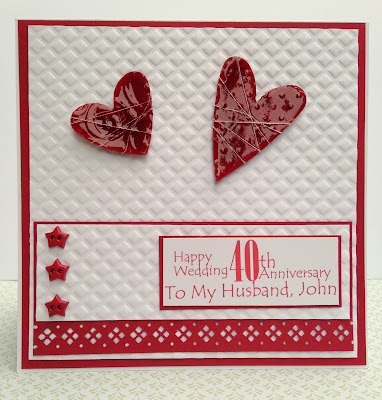 I used a white 6"x6" base & added a mat of ruby red card-stock.
The white, embossed card is from Lelli-bot.
I added a layer of ruby card, along the lower third of the card,
the bottom edge was punched using an EK Success border punch & a
mat of  the embossed card on top.
I created the hearts using the ruby red card.
I die cut them, then ran through the big shot to emboss, using Cuttlebug
swirls & swiss dots folders. Next I added some silver thread which was wrapped around.
In the past I have used embossing powder to give these a nice shiny appearance.
This time, as I had added the thread, I decided to try Anitas 3d Clear Gloss.
It took ages to dry (overnight) but I am really happy with the result.
The sentiment was created in my graphics programme.
I added 3 ruby red star buttons to embellish. 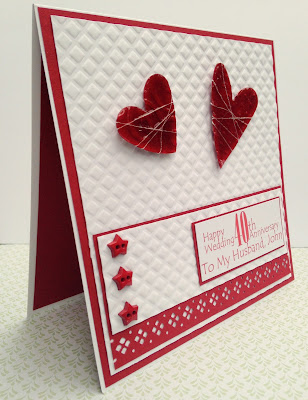 On the inside of the card, I added a mat of ruby red card & a
die cut heart in white, to write on.
Thanks for popping in, I do hope you like my card!
I certainly had a lot of fun creating it!