Grease Is The Word!

Good morning all!
The weekend is nearly here...... hurrah!
I have another card to share with you today! 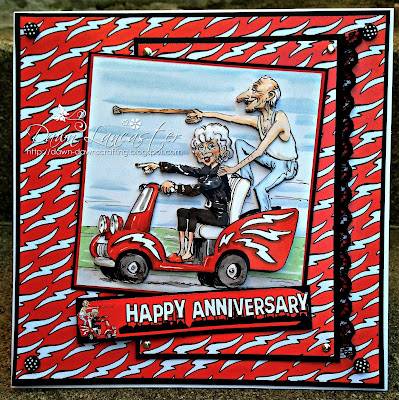 It's another fun Anniversary card from the La Pashe
"Wrinklies At The Movies"
You've probably guessed the movie they're at already but if not, it's
Grease! It's brilliant isn't it!

The card is an 8"x8" base.
The patterned paper is from La Pashe too.
I matted it on to some black card & added some Papermania black spotty brads to the corners.
I then made a smaller panel to which I added some black lace & some smaller silver brads.
(I've had the brads in my stash forever)
I then matted & layered the decoupaged image on to some
red & black cardstock before adding to the card at an angle. 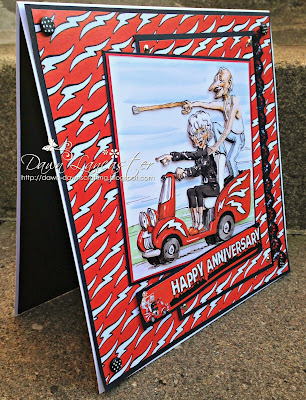 The sentiment was matted on to some black card & mounted on foam
tape at one end & DST on the other to allow it to be curved.
Inside the card, I added a mat of black card, to keep everything stable.
I also added a red diecut heart & a smaller white one on which to write a message.
Thanks for popping in, I do love a little visit!
Hope you like my card!

I'd like to enter this card in the following challenges:-
Crafty Ribbons - Lace
Crafting With An Attitude - Anything Goes
Crafty Creations - It Takes Two
Crafting For All Seasons - Layering It Up
Shopping Our Stash - Show Us Your Smile
Crafting From The Heart - Anything Goes

Good morning all! Happy Monday!
Time for the brand new challenge for this week over at the
Eureka Stamps Challenge Blog where our theme is
#159 Monochrome
(Shades of one colour, skin tones are permitted too) 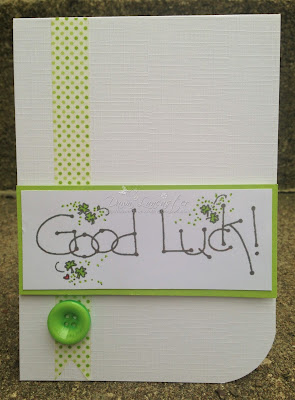 I used the digi sentiment 8101 (488) Good Luck
to make my Clean & Simple little card.
I used an A6 Linen Embossed Card base to whichh I added a strip of
Washi Tape.I coloured the image with my Chameleon Markers,
the first time I've used them. The image was then matted on to some green card
and mounted on some foam tape. The final addition was the cool green button
from my stash. The bottom corner of the card was rounded using a
Woodware punch. 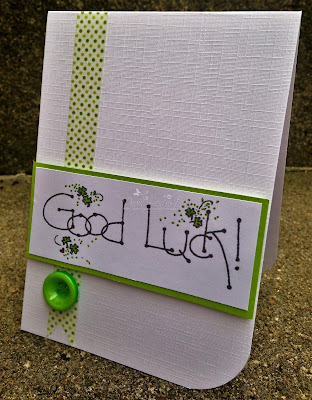 Thanks for popping in today!
I'm lucky enough to have the day off work as it's a local holiday,
so you may well find me crafting at some point today!
I hope we see you in the challenge this week!

I'd like to enter my card in the following challenges:

Crafty Friends -  B is for... (button)
Hiding In My Craft Room - Freestyle
Addicted To Stamps & More - Make Your Mark
Inky Impressions - Fancy Corners
Through The Craft Room Door - Anything Goes